Find this article at:
go.ncsu.edu/readext?676965
— Written By Jeff Owen and last updated by Jim Hamilton

With above average March temperatures, perennial grasses greened up and are growing earlier and at a more rapid pace than normal. Predicted cold fronts may slow weed growth to some degree, but spring is in full swing. Now is a good time to suppress cool season grasses before they get older and tougher. If a field does not have a grass problem, you can wait until the normal May suppression treatment window.

Grasses are the most harmful weeds to Fraser fir Christmas trees. Unchecked, they shade and choke bottom branches. Grass root systems are very dense and out-compete tree roots for water and nutrients. Tree growth can be stunted and off-color. Some grasses have allelopathic properties that inhibit root development of other plants. You can observe this barrier to root growth if you dig between pre-emergent banded rows and grassy row middles. The worst weeds of all are perennial cool season grasses including tall fescue, quackgrass, orchardgrass, brome, bluegrass, and fine fescue species.

Several treatment options exist. Mowing will shorten grass height but will stimulate root growth and increase dominance of grasses in the ground cover mix. Mowing is also labor intensive. To get rid of competitive grasses, herbicides are a must. Pick a strategy that fits with your ground cover management goals. 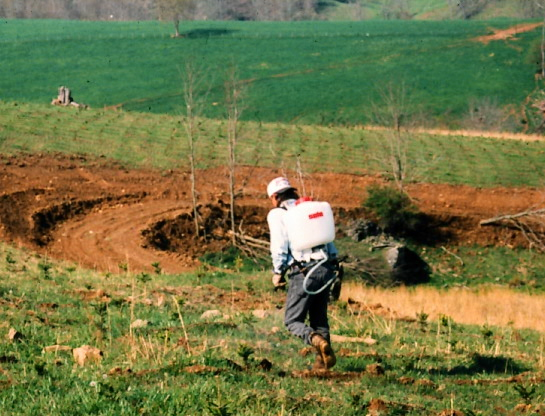 On flat or gently sloping sites where erosion is of minor concern, pre- and postemergent bands of herbicides can be applied along tree rows to remove weed competition close to trees. This strategy can buy time for transplants and young trees with minimal competition from grasses and other weeds. Conventional preemergent mixes included 1.5 to 3 qt. simazine 4L or 1-1.5 pt. of Goal (oxyflurofen) each combined with 1.5 to 3 quarts of pendimethalin 4L. Either preemergent mix should also include 20 to 24 oz. of glyphosate per acre to control emerged weeds. The choice of preemergent herbicide depends largely on the population of weeds present. Each product has its own strengths and weaknesses with certain weeds more likely to germinate through the herbicide barrier. The drawbacks of establishing bare rows include loss of organic matter through oxidation, exposure of loose soil to wind and water erosion, and germination of problem weeds after pre-emergent herbicides degrade.

An alternative strategy recommended by Extension and used by many growers, is to suppress weeds with low rates of herbicide broadcast from tree row to tree row. This approach minimizes the risk of erosion. The primary suppression treatments are low rates of 41% glyphosate repeated several times during the growing season. Fraser fir foliage safely tolerates these low rates applied at the right time. The standard recommendation for the mountains is 8 oz. in the first half of May during Fraser fir bud break, 4 oz. in June when Fraser fir foliage is tender, and another 8 oz. in early July after Fraser fir growth matures. These rates are applied uniformly to weeds at a steady calibrated walk without avoiding Fraser fir foliage when using a backpack sprayer. Higher rates during these treatment windows risk tree injury and excessive bare soil (which leads to excessive germination of summer annual weeds). With some annual adjustments, these three applications of glyphosate suppress weeds adequately until frost. Many growers successfully apply these rates with mistblower sprayers. Suppression treatments can also be applied to row middles if preemergent bands are already established.

With grasses being a little further ahead this year, growers should consider an April glyphosate suppression treatment where grasses are especially heavy such as newly planted former pastures. Killing grasses outright in old pastures is a mistake that drives populations of white grubs to feed on tree roots instead of grasses. Broadcast weed suppression leaves a supply of food for grubs whether they burrow up along the tree row or in the middle.

An April grass treatment window is characterized by better glyphosate-tolerance of Fraser fir and less tolerance by grasses. Grasses are shorter, less mature, and their leaves still have thin cuticles. Glyphosate penetrates tender leaves more easily. At the same time, Fraser buds are becoming active. Developing buds are susceptible to rates of glyphosate above 16 oz. to the acre, but will tolerate as much as 12 oz. per acre safely. Growers can increase suppression rates in April to achieve better knock down of grasses – a suppression option that is not available in May.

By suppressing the grasses, April treatments release glyphosate-tolerant white clover if present. A 12 oz. rate of glyphosate may be borderline “too hot” on desirable ground covers like clover. Some growers have compromised with a 10 oz. rate which still achieves better grass knock-down than an 8 oz. rate.

An April cool-season grass treatment will not replace normal May suppression treatments. Many of the weeds controlled in May haven’t even germinated. One of the original reasons we learned to wait until May for our first application was to control late-germinating weeds with potentially explosive growth. These include horseweed, ragweed, lambsquarters, and pokeweed among others. You can scout for germination of these and other problem weeds to determine if a May suppression treatment is needed.