The Remains of the Season…Christmas Tree Recycling

Find this article at:
go.ncsu.edu/readext?761841
— Written By Jim Hamilton

It’s January second, and you’re staring at it one last time. Three of the seventeen glass balls the cat swatted to the floor are shattered prizes behind the skirt, deserving of a 2-hour tweezer session or a trip to urgent care. A drop of water hasn’t been added to the stand in over two weeks. The tree long-quit drinking it anyway. Depending on the species you selected, the entire symbology of Christmas now a lonely, forgotten skeleton in the corner of the room with an accumulating pile of needles that builds faster than can be dust-deviled. The bitter angel remains on high watch, casting blame and discord as her box still can’t be found—probably pitched with the rest of the cardboard. The magic of the season faded to swift memories of the morning mayhem of the week prior—shredded wrapping paper littering the floor and the compliments on the sassy-cat imprinted pajamas, turtleneck sweaters, at least one 2020 meme-mug, and the metallic whine of battery-powered vehicles revving their way into feet and furniture followed by a soundtrack of giggles. Despite the inevitable return to domestic routine, family tradition and the kids have dictated that it HAS to stay up until AFTER New Year’s…Great. 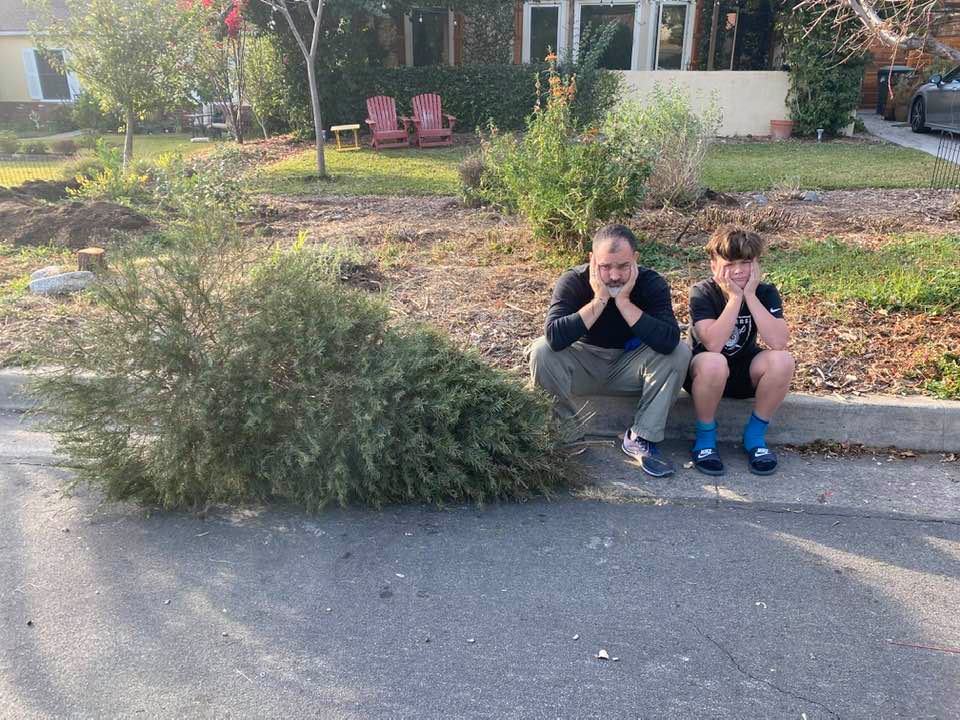 There are many ways to dispose of your Christmas tree at the end of the season.

While it may seem that this last vestige of the holiday season is treated with the same disregard as the inconvenient dead, you can find solace knowing that most choices regarding the disposal of your once-fresh cut Christmas tree are sustainable ones. Environmentally friendly, even. Of the 30 million carbon-storing, oxygen-exhaling, farm-grown Christmas trees cut each year, most meet their Fargo-esque end at the county landfill—chopped unceremoniously into mulch—one after the other. Out of sight, out of mind. In the neighborhoods where POA rules dictate that lawn refuse be bagged, discarded trees are bundled into body-bag sized contractor plastic, knotted at the end and left on the curb next to the mailbox like a scene from Contagion. The dried shreds of fir, pine, and spruce do break down nicely, though. A fitting end and transformation into moisture-preserving compost and food for the microbes, gracing the hostas, peonies, and boxwoods of the summer front-porch landscape beds. Ahh, the circle of life. Unlike the free-standing pre-lit green toilet brushes—or ‘artificial trees’ as some refer them to—shoved into the attic to harbor dust and brown recluses until the following year, recycling your real tree can beget its own traditions & ritual.

If you live off a rural, no-trash-pick-up road in the mountains like we do, you can simply drag the corpse of Christmas past to its final resting place within the recesses of the forest just beyond the property line under the last tangle of rhododendron thicket. Tony Soprano would be proud. Nobody’ll see a thing. All evidence of your family’s holiday cheer tidily disposed of, creating new life and abundance for countless critters of the forest—hiding places for rabbits & chipmunks, the remaining needles providing bedding for the duration of our coldest months. The back-lot’s tree graveyard can be sufficiently piled to maintain housing for the entire cast of The Secret of Nimh. 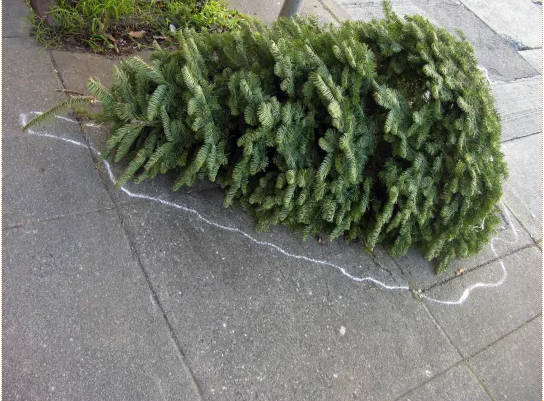 For the anti-recyclers, your tree perhaps fits into the backyard fire pit, where it can wait until January’s first snow thick enough to create a worthy spectacle. While virtually flame-retardant when freshly cut and well-watered inside the house, a Fraser fir, the ‘Cadillac’ of all Christmas trees, with its fragrant needles and sturdy branches, makes an impressive post-holiday pyrotechnic display once left to the elements for a few weeks. It’ll light up your entire cove of snow-covered rhododendron hedge with a crackling effervescence as impressive as a cul-de-sac mortar show on the 4th. Just keep the hose connected or the fire-extinguisher handy…just in case.

Many choose the ‘sleep with the fishes’ approach to tree-recycling. Strategic placement of your defunct tree in a shady corner of a pond or lake creates excellent habitat and protection from predators for many fish species and future secret casting spots. Only during the droughts of summer will anyone notice the evidence…emaciated ribs of the family tree peering above the surface of the still, brown waters—the algae-covered rope tangled around the cinder block that sunk it. Only the glint of sunlight off the dulled brass spinner baits hung on the limbs from poor casts give any hint as to what lies beneath. 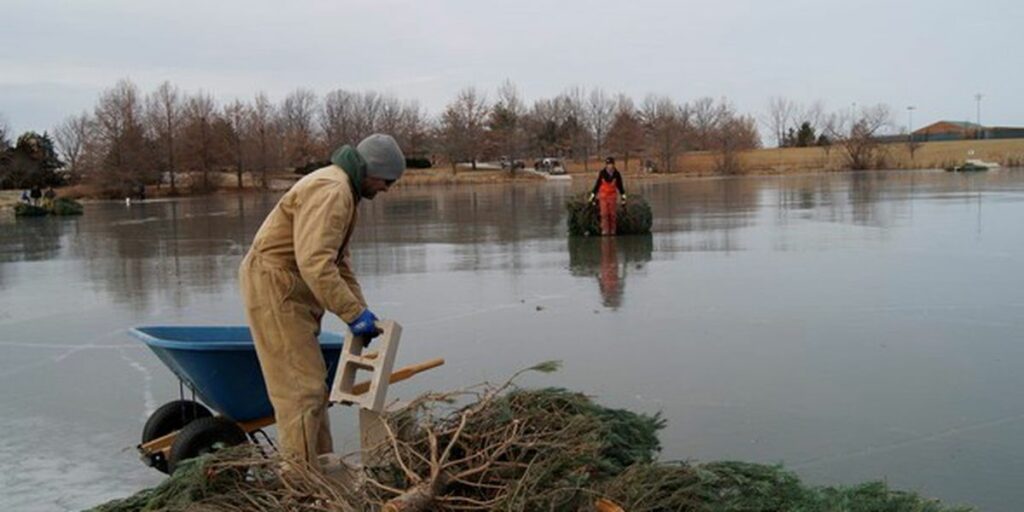 If you have a soft spot for the chickadees and cardinals that crowd the feeders on your back porch throughout the winter, you CAN keep that good ole Christmas cheer rolling into Spring. Just slather a couple jars of Jif or Skippy over the tree’s brittle branches and dust it thoroughly with bird seed. Turns out when you tar and feather a 7-foot tree with 10-lb bags of Pennington’s, it’ll last until at least March, when Dad sprays down the layers of new “gifts” left under this tree. “Thanks, Southern Living,” he’ll say to this incredible recycling tip guaranteed to ruin the porch and Dad’s holiday spirit.