Find this article at:
go.ncsu.edu/readext?775726
— Written By Richard Boylan and last updated by Kirsten Dillman

(emphasis on apple, pear, and peach) in Western NC: suitable for organic production

To get a jump on fruit tree health during the winter and early spring months, preventative dormant sprays in combination with correct pruning and sanitation are the two most important tools for growers. Employing one or more of the following sprays and complementary cultural techniques during tree dormancy will set you up for a healthy rest of the growing season. Copper-based fungicides and lime-sulfur can each help to suppress common fruit tree diseases, and a late dormant season oil application can play a significant part in managing pest insects. Taking the time to employ good cultural practices and also spray your fruit trees with these materials during the dormant season will reduce pests such scales, mites, and aphids, and diseases like apple scab.

Lime-Sulfur is a fungicide that controls diseases like apple and pear scab and peach leaf curl. It has a sufficiently powerful and long-lasting rotten egg smell that you may want to warn nearby neighbors about what you plan to spray, and that it is in fact allowable under organic production systems. Some growers in western states where lime sulfur is no longer permitted as a fungicide have moved toward substituting elemental sulfur as a dormant spray, but lime sulfur products are still registered in NC and considered more effective for dormant spray purposes. In addition to its disease control benefits, a lime sulfur spray during the dormant season can work as a miticide and help suppress scale insects as well.

Copper-based fungicides help control diseases like bacterial blight, and fire blight. Coppers kill bacteria and fungal spores left on or in trees, including Pseudomonas syringae, the common bacteria that can cause the oozing bacterial infested honey-like sap from bark split known as gummosis in peach trees. The exact formulation of copper, whether copper sulfate, copper hydroxide, or another registered fixed copper product, is not a big concern during the dormant season as long as label restrictions and guidelines are followed.

Superior oils, also called horticultural oils, are highly refined seed or petroleum based oils and emulsifiers that, when mixed with water and sprayed on trees, will smother overwintering insects and their eggs, ideally just as the dormant season is concluding and trees are ready to resume growth. Oils help to suppress San Jose Scale, European red mite, rosy apple aphid, and potentially other insect pests. Applying a superior or horticultural late in the dormant season facilitates greater coverage and a higher likelihood of smothering a majority of pest insects before they hatch. A single application of oil, ideally just at the end of tree dormancy is all that’s needed. It can be applied (generally at ~3% oil in water for these uses) at green tip to ½” green tip on pome fruit, and any time before bloom on stone fruit. As temperatures warm up, insect respiration increases, making the oil much more effective at suffocating the insects during those milder early spring days. During the colder weather of the earlier dormant season, insect respiration is lower and the oil has proportionally less effect.

This trio of pesticides, which can be used in organic or conventional orchards, fits within the scope of IPM or integrated pest management, having low toxicity. Used in conjunction with proper cultural and pruning practices, such a dormant spray rotation can literally nip many fruit tree problems in the bud. When used with proper Personal Protective Equipment and according to label instructions, they won’t cause problems for the environment, wildlife, or people. And though horticultural oils kill most insects they land on, beneficial insects and their eggs are rarely in or around fruit trees during the dormant season, so dormant spray timing makes it very beneficial and pollinator friendly.

Ideally, each of these sprays should be applied about a month apart, but even one or more sprays with a few weeks gap in between applications during the dormant season can be worthwhile and effective. Spray any of these products when temperatures are above freezing, but before buds fully break (generally April in the NC High Country, but dependent upon exact species, variety, site, elevation, etc.) These three sprays are being discussed as a rotation, and not a tank mix: don’t ever mix copper and lime-sulfur in the same tank. Lime-sulfur is also highly incompatible with oil. Do not spray oil within a week (at minimum) of using lime-sulfur.

Some of the sprays discussed above can also be used at different rates and for different purposes during the growing season. For example, lime sulfur has an application during bloom to thin the final load of pome fruit. And horticultural oils used at a lower rate (generally ~1%) after (but never during) bloom can reduce the hatch of Lepidopteran pest eggs including codling moth and oriental fruit moth. 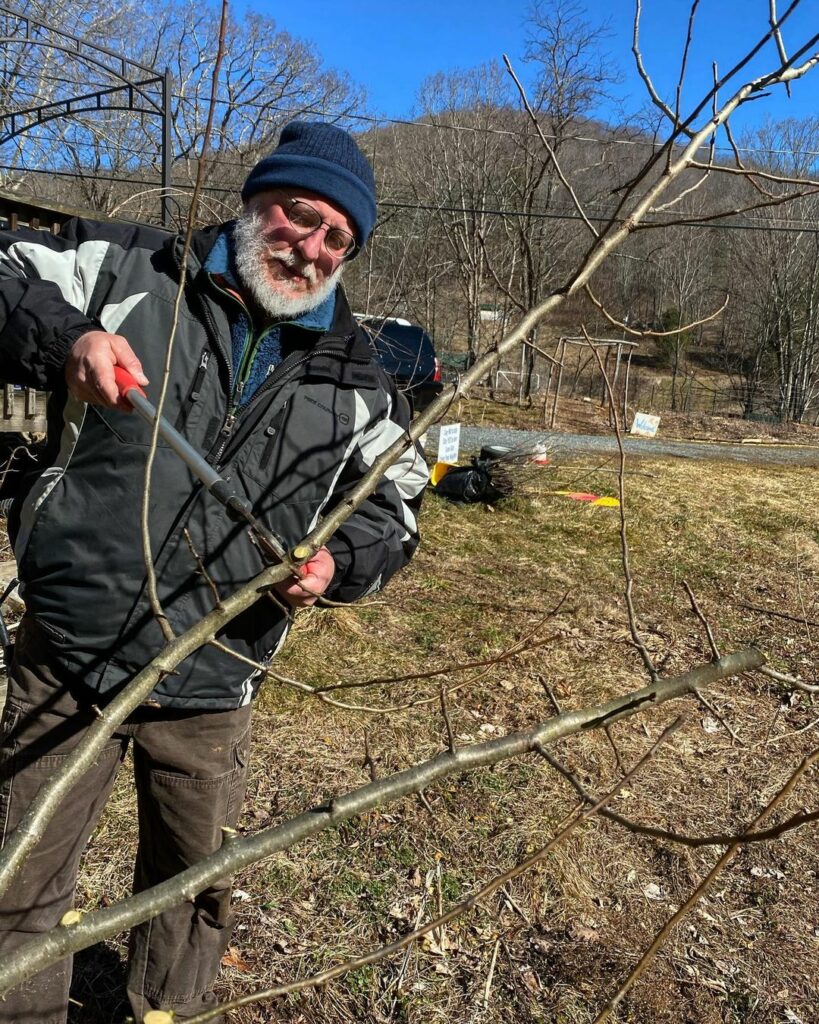 In addition to dormant sprays, prune trees to keep the branches separated for good pesticide coverage and good air circulation around leaves and fruit. It’s best to complete pruning ahead of some dormant spraying, so that at least the last spray or two will cover pruning wounds. Also, clean up fruit, leaves, and debris still on or under trees during the fall or winter. Such debris can harbor insects such as plum curculio and diseases such as apple scab. If you don’t want to rake leaves, mow over them a couple of times and leave them to decompose as an easier but still effective IPM strategy. Clear weeds from around tree trunks and under the tree where insects and rodents can hide. As the growing season gets started, add organic matter within the trees’ dripline (but never directly up against the trunk) for fertility and because enhanced microbial populations in the soil will help devour the remnants of orchard sprays that contact the ground. Based upon your planned markets or usage, the dormant season is a good time to plan and otherwise prepare for insect and disease management for the growing season ahead. Cider and processing markets can be more forgiving than fresh-eating, but be sure that you and your buyers are on the same page about fruit quality ahead of time, regardless of market. Achieving the quality required by fresh-eating markets will generally require IPM sprays beyond just these recommended dormant season applications.

For more information on fruit production and pest management any time of year, call Cooperative Extension at 828-264-3061.